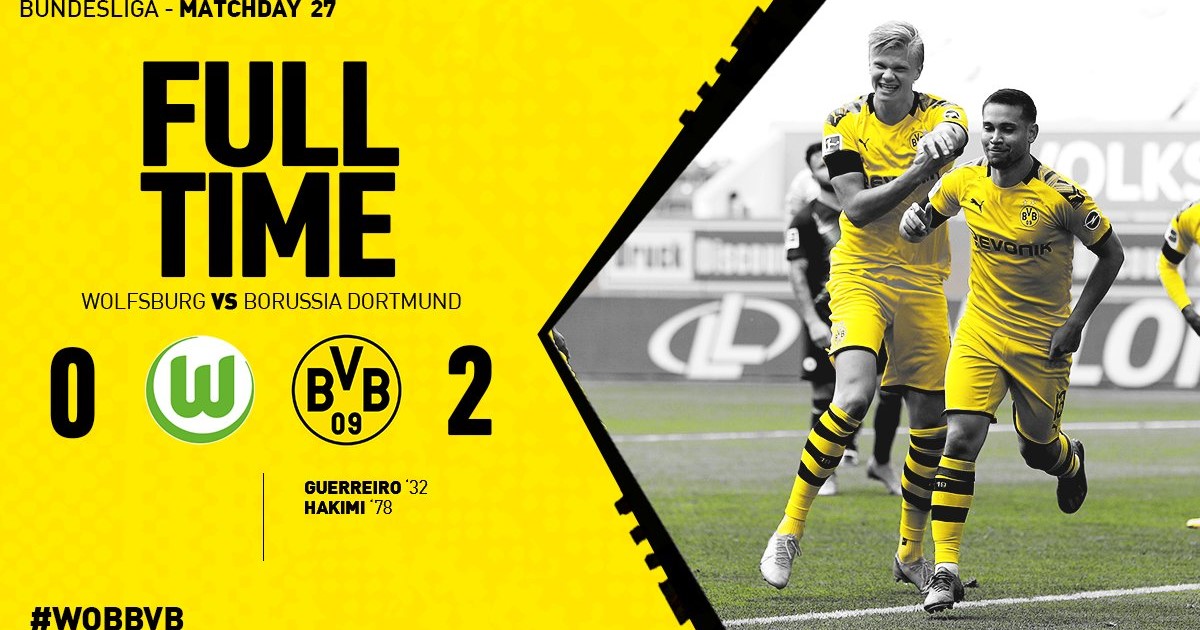 As we have seen in the previous game Dortmund restarted the season in form, prepared and hungry for the new wins. Home win against Schalke 04 was pretty convincing. Wolfsburg also won in the previous game, although it was last minute goal win, but anyway, the team is fighting for the eurocups zone and has a great opportunity to play in Europa League next season.

Dortmund started with their usual 3-4-3, with Hakimi and Guereiro on the sides, J.Brandt, E. Haaland and T.Hazard as the attacking trio. Wolfsburg went on 4-4-2 with the huge block of 6-7 players that would put a middle block and prevent all the attacking efforts of BVB right in the center circle. This is why, for example, Haaland didn’t have a ball at all and was almost invisible during the game.

The strategy BVB used to pass this defensive block was quite straightforward: they will move it from side to side and when too much players would gather they will pass the ball to the opposite site. Normally it would be overcharge the left side and then send a long ball to free Hakimi and while the defensive lines will rebuild Hazard, Haaland and Hakimi will try to create something. But, as Guereiro and Hakimi were manmarked and anytime they receive the ball the opponent will arise in front of them that didn’t happen a lot. Actually in 1st half it happened just twice. And led to goal and very dangerous moment.

We have to admit also a role of Brandt. He is a free painter on the pitch and a lot of times would go deeper to receive the ball and start the attack or appear on the opposite side of the pitch (he plays on the left, but in the moment of the goal appeared on the right side). By creating such superiority of creative players in one zone (Hakimi, Hazard, Brandt) BVB managed to score.

After the goal the game didn’t change much. Dortmund continued to control the ball, Wolfsburg continued in the middle block, trying to steel the ball and attack vertically. They hoped for long balls and crosses as in the attack Wolfsburg had 2 huge trees that can win aerial balls and put a pressure on the defensive line. Although, this strategy didn’t work much, so for the second half the coach of wolves had to introduce some changes.

Another point to notice – Dortmund has a lot of difficulties in surpassing such kind of defences, 2 shots in 45 minutes is not enough for the team that has an ambition of winning Bundesliga.

In the second half Wolfsburg became more aggressive in their pressure as they saw they were able to do it successfully. As Wolfsburg doesn’t have mega creative quality players they decided to win by quantity. Just from the first seconds of new half they would overcrowd specific zone and try to steel the ball and after that create danger close to the BVB’s goal while yellow-black defensive line is incomplete after such a sudden transition.

But they weren’t able to convert those situations of superiority. Also BVB restructured and started to play low defensive block as they were unable to stop that physic in the middle. So 3-4-3 in second half during the defence faze was 5-4-1: Hakimi and Guereiro will drop down and Hazard with Brandt will join Delaney and Dahoud in the midfield.

In the first 20 minutes by applying such tactics Wolfsburg generated 5 shots which should have been converted into a goal while BVB wasn’t able to move forward and didn’t even try to shoot. But if you put a lot of players in one zone it means that another one will be empty and that was something that Dortmund understood and was just waiting for the possibility to counter attack.

The key change, Sancho instead of Brand, was the decision that put a dot in the game. I remember myself thinking: “why change Brandt, he was playing great!” And then just in few seconds I realized: Brandt is incredible in a positional attack while Sancho with his speed will be perfect for counter-attacking when Wolves put so many “troops” forward.

And then it worked! Little error passing the ball between the lines, clearance by Guereiro, quick transition and vertical attack while all players of the home team are behind the ball. Situation 3 against 1 -> second in the net.

And one minute later red card for Wolfsburg’s player Klaus. I am not that good with rules to say it was deserved red or not, but the action looked freaking dangerous.

And a bit of post-match numbers explanations.

Take a look at DEEP parameter. It shows passes completed in the estimated 20 yards of goal (crosses excluded). WB has it 0, which means there was no play in the box of BVB. Why? Because the tactic was – cross and shoot or you see the possibility to score – shoot, also the quality of players of WB doesn’t allow to control the ball inside the opponent’s box (if that opponent is higher class). At the same time BVB didn’t have a lot of time inside of the opponent’s box because WB was pressing high and preventing even enclosing with their own box. But that didn’t help them :/

It was a tough game for both teams, Wolfsburg tried, they played well, but the lack of skill or maybe luck made it to 0-2 win. Dortmund after scoring a goal just went back, waiting for mistakes of the opponents and half-head in the next game against Bayern Munich – Der Klassiker.