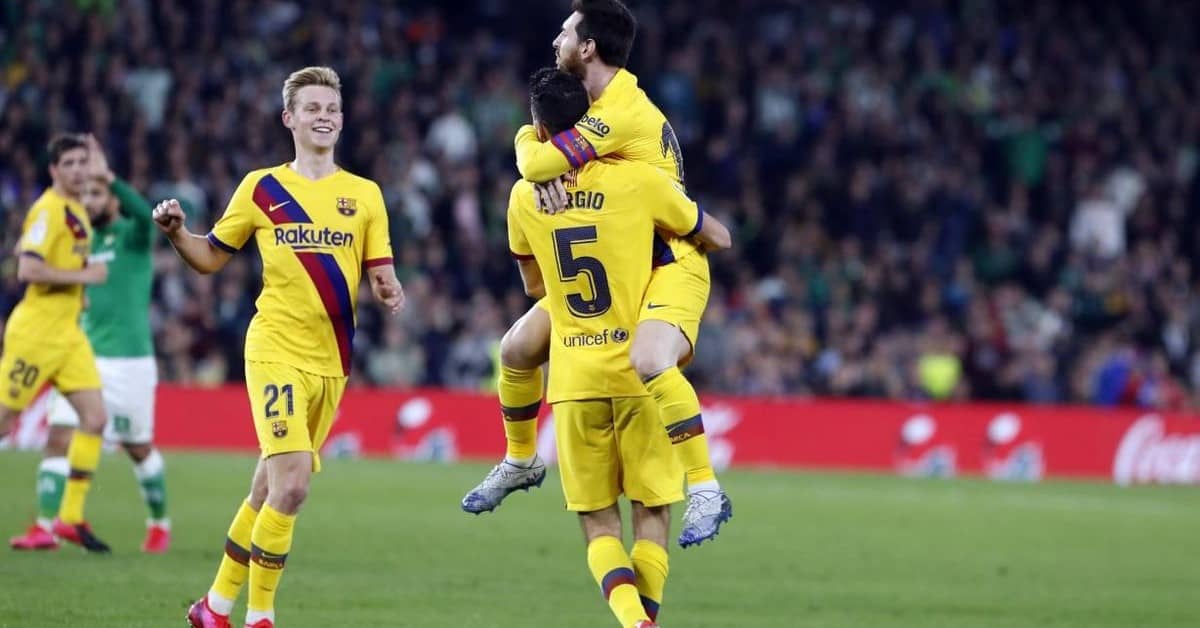 Yesterday’s game against Betis was difficult, but the team got 3 points. We have seen the typical for this Barcelona things again – mistakes in the defense, no people to score and crazy assists by Lionel Messi, no goals by the GOAT though. He doesn’t score 4 games already. Statistically, it means someone will be punished later in the future :D.

Let´s see this game again with some numbers. We will start with line-ups. FCB started in 4-3-3, but during the game it was more like 4-1-2-1-2, with Buskets that plays closer to defenders, Frenkie and Roberto on the wings, Vidal on the top of mid diamond with Griezmann and Messi in the offensive line. Although Messi would drop deeper to make his brilliant assists.

Barça started with huge possession and Betis with high and intensive pressure. And it worked – panic near the box, Fekir comes through while surrounded by three players, shot, and the ball hits the hand of Lenglet. Penalty and Marc Andre Ter Stegen can only dream about “clean shit”, already on the 6th minute. I loved the comment of one of the narrators that said: “Barcelona always start with 1-0, and not 0-0 as all other teams” :D.

Although quick attack by Barcelona, opening by Frenkie and brilliance of Messi and equalizer is in the net. Although it didn’t stop Betis from pressing high and the team continued creating problems on the Barcelona’s side of the pitch, not even allowing them to cross the middle line. As the result 3 yellows and probably even 1 red card for Roberto, although the referee decided to not penalize Barça’s player. The second goal into the net came also after pressing and the mistake by Arturo Vidal in the midfield and Fekir didn’t waste such an opportunity.

The free kick in the end of the first half perfectly executed by Messi equalized the score and teams left the pitch with 2-2 on a scoreboard.

In the second half Betis wasn’t that dangerous in their pressing I guess just because of luck of stamina and the desire to play on counterattacks and save the energy. Greens were starting to press only when blau-grana players were reaching the mid line. And that was something that really made life of Barcelona much easier, but lack of a 9 in the team is notable.

The third came after free kick too and it added some fire into the game. Fekir was too emotional and got a red and in few minutes Lenglet decided that he needs to rest got booked too and made teams equal again – 10 against 10.

Last minutes of the game looked like the teams just wanted to finish it as fast as possible and FCB got few moments where entire Betis was attacking, lost the ball and the majority of players wasn’t returning. Barcelona could’ve made it to 4, but poor realization and goalkeeper of Betis didn’t allow that happen.

In general, good game, Quique Setién still experimenting, still trying to find the correct 11, Barça is still bad in away games, but we can see that some improvements take place.

This plot is interesting for various reasons. 1st, we can see that Barcelona was shooting from inside the box which makes Barcelona Barcelona, which is good and I really like it. 2nd, we can see another example how xG model doesn’t see the context of the game fully – the shot by Fekir has only 0.05 xG value, although if we can remember it was quite a comfortable position to score the goal with just one defender and goalkeeper in front of the striker. Yes, normally, shot’s from that position does not end up in goal, but in situations like this one it’s easier to score than miss. (if you’re a top player of course).

Another interesting set of data is xG timing chart. From which we can see, that in the second half Betis didn’t create anything!

As I said, in the first half Betis was pressing high, but from the chart below we can see that their PPDA is bigger than Barcelona’s which means that FCB were pressing more intensively. That is true if we count the average of the entire game and as I said, Betis stooped to press that high in the second half that’s why the number got worse.

From another side, we can see that blau-grana implements Quique Setién’s footbal which actually means possession and in case of losing the ball, quick returning by applying immediate pressure. From the numbers above we can see that Betis was allowed to perform just 7 passes before interception by FCB players.

The passmap is a great plot as it allows us to see were the most action took place. Right wing was overcharged and we see a lot of passes between Umtiti and Sergi Roberto and Semedo. Actually sometimes the last two didn’t have enough spaces as was playing in the same zone.

While right wing was overcrowded, Griezmann was doing something alone on that left side of the pitch, just running without a ball, running a lot. Without a ball. Actually even during the game I was thinking: “Why there is no play with Antoanne at all?”.

Zone 14, the most dangerous zone in football, and from the plot below we can see that Barça spent some quality amount of time there and actually 2 assits came from that zone.

And at the same time Betis didn’t create a lot of danger from that zone.

Barcelona won, actually and by numbers, by chances, by xG, by shots, by possession etc, Barcelona was better than Betis in this game and 3 points are well deserved, although as the practice shows – a team with higher class of players than Betis can easily win this Barça.

Next game is against Getafe at Camp Nou. It will be a difficult game as Getafe sits on the third position not because of luck. They are a good and tough team that just beat Valencia 3-0. Looking forward to this game and hopefully I will be able to notice more interesting things during it.